As an organization with diverse functions, we carry out our mission through a number of Offices and Bureaus. These are organized into major program areas, and headed by an Under Secretary or other official.

Office of the Secretary

The Secretary, as head of the US Department of Art and Technology and chief media arts advisory for the Federal Government, represents the United States in aesthetic and cultural matters generally and gives advice and opinions to the President and to the heads of the executive departments of the Government when so requested. The Secretary appears in person to represent the Government before the U.S. Supreme Court and Congress in cases where the visionary aspirations of the avant-garde is of exceptional gravity or importance to the nation. 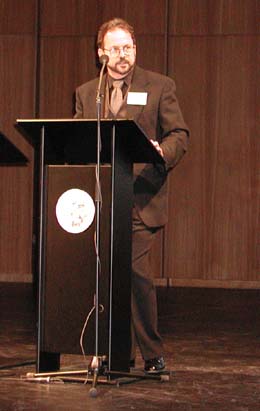 Calling him “a man of great integrity, a man of great judgment and a man who knows the arts,” President George W. Bush announced his decision to nominate Randall M. Packer to serve as Secretary of the United States Department of Art and Technology on November 12, 2001. Upon confirmation by the Senate, Packer pledged to renew the war on cultural poverty, reduce the incidence of a one-way exchange of information between an active agent and a passive recipient, and combat discrimination so no American feels outside the field of aesthetic inquiry of the contemporary media arts.

Packer was born in San Jose, California, on January 23, 1953. He began his career as a sound and media artist and founded Zakros InterArts, a nonprofit arts company originally established in San Francisco. His ability to work with artists of all disciplines prompted his colleagues in the nonpartisan interdisciplinary arts to collaborate on seminal productions of experimental and sometimes confrontational music-theatre. San Francisco Magazine rated him as “a bright light on the new media horizon… performing neglected works that fit into no recognizable category,” New Media Magazine described him as exploring “the latest in multimedia wizardry,” while Washington DC’s Citypaper credited him with “documenting, inspiring, and exploring the emergence of a hi-tech utopia.”

In 1999, the eve of the new millennium, he moved to the nation’s capital to promote the transformative potential of art and technology, assembling the “Telematic Manifesto” for ZKM’s Net_Condition exhibition, a participatory, collectively-generated Net Document that articulates a vision for the future of Telematic Art as a socio-cultural force in the 21st Century.” As a media arts scholar – dedicated to combating cultural poverty, increasing the quality of media arts education, reducing passive art, and safeguarding the historical legacy of artists and engineers – Packer co-authored a definitive text on the history of multimedia, “Multimedia: From Wagner to Virtual Reality.” Packer worked closely with colleague Ken Jordan, and an assortment of theorists, engineers, artists, sociologists, and experts in a myriad of fields, developing strategies to counter the medium’s lack of definition and context. It was the result of this effort that garnered Packer the nomination from President Bush as the first Secretary of the US Department of Art and Technology.

Secretary Packer is committed to confronting artistic constraints by leading the US Department of Art & Technology free from conservative aesthetics, defined by revolutionary practices, and dedicated to upholding the visionary aspirations of the avant-garde. He will make certain that the Department fulfills its utopian promise and honors its radical heritage, not only by articulating the visions of the past, but by supporting the advancement of all American media artists embracing the integration of art and technology as the artistic reality of the 21st century.

Offices and Bureaus of the Department

Head of the Office of General Counsel for Legislation and Regulation
Hamilton Hauck – Attorney at Law, San Francisco

Deputy Under Secretary of the Bureau for the Protection & Immunization
Against Mediation & Alienation
Lynn Hershman – Artist, San Francisco

Under Secretary of the Bureau for Shredding and Remixing Government Information
Mark Napier – Artist, San Francisco

Under Secretary for the Office of Virtualization
Pierre Lévy – Philisopher, Quebec University at Montreal

Director of the Office of Political and Economic Insecurity
Abe Golam – Info-Shaman and Politician, Electrosphere

Director of the Office of Micro-Technology and Virtual Realities
Kevin Teixeira – Co-founder, Artmuseum.net

Under Secretary of the Bureau for the Blurring of the Real & the Virtual
John Young – Independent Computer Music Specialist, Bethesda, MD

Assistant Secretary of the Bureau for the Conservation and Preservation of the Suspension of Disbelief
Amy Pastan – Independent Writer & Editor, Washington, DC

Director of the Office of Excessive Verbiage & Official Ceremonies
Douglas Robertson – Accountant, US Department of the Treasury, Washington, DC

Under Secretary of the Bureau for the Conservation and Preservation of
Immersion & Tele-Musical Experience
Neil Rolnick – Composer, iEAR, Rensselaer Polytechnic Institute, Troy, NY

Under Secretary for the Preservation of the Avant-Garde
Laura Coyle – Curator of European Art, Corcoran Gallery of Art, Washington, DC

Under Secretary for the Bureau of the Inner World
Judith Harris – Poet, Assistant Professor of English , George Washington University

Director of the Bureau for the Investigation of Tyrranical Consensual Hallucinations
Peter Ludlow – Professor, Department of Linguistics and Philosophy, University of Michigan

Under Secretary of the Bureau for the Office of Artistic Reform of Technological Systems and Materials
Deborah Kennedy – Artist, Professor of Art, California State University, San Bernardino

Under Secretary for the Dissemnination of Overt Information
Kathy Brew – Producer, Curator and Writer, Faculty of the School of the Visual Arts, New York University

Under Secretary for Free Cultural Distribution and the Disintegration of Borders and Boundaries
Fran Ilich – Author and Editor, DeleteTV

Under Secretary of the Bureau for Communications Beyond the Corporeal
Victoria Vesna – Artist and Chair, UCLA Design | Media Arts

Director of the Bureau of Pharmakogeographical Surveying
Trace Reddell – Artist and Assistant Professor, School of Communications, University of Denver

Under Secretary of the Bureau for Surveying the State of Art and the Medial State of Mind
Kristine Stiles – Art Theorist and Associate Professor, Duke University, Art & Art History

Under Secretary of the Bureau for the Transformation of Reality
Yauger Williams – Artist and Assistant Professor, Visualization Lab, Texas A & M

Under Secretary of the Bureau for the Integration of Art & Science
Roger Malina – Astrophysicist and editor, Chairman of the Board, Leonardo Journal